In this post I’m going to introduce the KOPs – Kubernetes Operations – concepts, why shoud use it, their advantages and overview. Then, I will provision some kind of AWS infrastrucure using KOPs, scale up and down our infrastructure and as a result I will deploy a monitoring solution to test our infrastrucute using ingress.

Kops is an open source tool and it is completely free to use, but you are responsible for paying for and maintaining the underlying infrastructure created by kops to manage your Kubernetes cluster. According offical site, now AWS (Amazon Web Services) is currently officially supported, with DigitalOcean, GCE, and OpenStack in beta support, and Azure and AliCloud in alpha.

Specifically in AWS, Why use kops instead of other provider cloud solutions like EKS?

One of the major advantages is that kops will create our cluster as EC2 instances and you are able to access the nodes directly and make some customs modifications, as result you can choose which networking layer to use, choose the size of master instances, and directly monitor the master and work nodes as well scale up and down your infrastructure only edit a file. You also have an option of setting up a cluster provisioning of Highly Available Kubernetes clusters or only a single master, which might be desirable for dev and test environments where high availability is not a requirement.

KOps also supports built on a state-sync model for dry-runs and automatic idempotency brings a powerfull model to version control your cluster setup and gives possibilities to use GitOps as pull model instead of push model using the best practices. If you would like, Kops also supports generating terraform config for your resources instead of directly creating them, which is a nice feature if you use terraform.

According official site, kOps has the following features:

Capability to add containers, as hooks, and files to nodes via a cluster manifest

In this section, I will provide you only the main commands that I consider important to provision and maintain a kubernetes cluster with kOps. If you want to go beyond, you can look it up on the official website.

For example, there are two ways of registering a cluster: using a cluster spec file or using cli arguments.

If you would like to create a cluster in AWS with High Availability masters you can use these parameters:

Or you can save your configuration in a file and apply later so that is good idea to keep it in a version control. You can use –dry-run -o yaml like kubernetes in place of –yes parameter.

After in production, you can add a node if is needed… For instance, for add a single node with a role node in a cluster you can use the follow command:

As mentioned, you can first register the infrastructure, after that you use the –yes with kops update cluster –yes to effectively create the resource.

kops edit
As we saw, kops create cluster creates a cloud specification in the registry using cli arguments. In most cases, you will need to edit the cluster spec using kops edit before actually creating the cloud resources. As mentioned, once confirmed, you can add the –yes flag to immediately create the cluster including cloud resource. Even the resources are running, you can use kops edit any time and after apply.

Some changes sometimes requires to perform a rolling update. Changes like add, delete or update a node or changes that requires major changes in cluster configuration. To perform a rolling update you need to update the cloud resources first with the command kops update cluster –yes. Nodes may be additionally marked for update by placing a kops.k8s.io/needs-update annotation on them.

(Nodes will be drained and the cluster will be validated between node replacement)
These commands I consider important to begin deal with kOps. There are many others commands, resources, operations and addons to be overviewed, but for now let’s focus in practice.

Provisoning a AWS Infrastructure with kOps

In this section I will show how to install kOps, install and configure AWS, configure route53 subdomain, configure, edit and delete a cluster and instances.

KOps can be installed aside your kubectl to manage and operate your kubernetes cluster. Via Linux you can install it as follows:

or install from source. If you would like to install from other OS you can get the information in official site .

To interact with AWS resoucers it is necessary to install AWSCLI and you can do it via pip:

After install, you should run and configure with the follow command:

If you have another AWS profile in your environment you can set or change the default profile before provision our infrastrucure with kOps.

First, configure a new profile. In this case I called kops and setup my keys.

So, to use the new profile we have two ways, the first is set the AWS_PROFILE variable with the name of the default profile. Another option is to set –profile option with aws command. I am going to use the first one.

Because “aws configure” doesn’t export these vars for kops to use, we export them now

In order to build a Kubernetes cluster with kops we need DNS records. There are some solutions that you can use here. In my case, I am going to use my own domain – filipemotta.me – that is hosted in AWS with route53. To use this scenario, we’ve to create a new subdomain zone – kubernetes.filipemotta.me – and then setting up route delegation to the new zone to kops creates the respectives records.

To create a subdomain in route53 you need to follow the steps bellow:

We’ll need to create a S3 bucket to kops stores the state of our cluster. This bucket will become the source of truth for our cluster configuration.

It’s important to create the S3 Bucket with the name of your subdomain (or domain).

Before start to create our cluster, let’s set somes env variables. You can export KOPS_STATE_STORE=s3://clusters.kubernetes.filipemotta.me

and then kops will use this location by default. We suggest putting this in your bash profile.

Before provision our cluster, let’s list which availability zones are available in the specific region.

A brief explanation is needed at this point.

Once the KOPS_STATE_STORE=s3://clusters.kubernetes.filipemotta.me was set previously, it does not need to set in this command. The default networking of kOps is kubenet but is not recommended for production because it does not support network policies and other features, so we’ve to use on of these supported networks. In this case, I used calico.

To prevent the master becoming unavailable, we provided the high availability kubernetes cluster with 3 masters nodes and 3 workers nodes. Each of these nodes – master and workers – are available in all availability zones (we can define a smaller amount). If you do not define a cluster with high availability you cannot interact with the API Server during any upgrade or failing node, so you can’t add nodes, scaling pods, or replace terminated pods.

Therefore, when you define the node’s count it runs a dedicated ASG (autoscaling groups) and stores data on EBS volumes. We’ll see soon in the configuration file that we define the minimum and maximum number of the nodes. (the minimum is a quantity defined by params, –node-count 3 –master-count 3). Finally, we set the cluster name that should match with the subdomain name created previously.

The public subnet is routed to an Internet gateway, the subnet is known as a public subnet. The private subnet will have public access via the Kubernetes API and an (optional) SSH bastion instance (–bastion=“true”).

After apply the configurations, see the suggestions:

Note that we can change then subnet, network and cluster CIDR the resourcers requested, restrict the access to the API and so many others.

As the kops separate the configuration per availability zones, we shoud set up each of one if wanted. Supposing we want to change the type of the machine type or config the autoscalling group for the specific availabilty zone we can do it through this command:

After review and edit any configuration you wanted, it’s time to apply these configurations to start the provisioning.

kOps has set your kubectl context to kubernetes.filipemotta.me

Cluster changes have been applied to the cloud.
…

Yes!! It’s done! As you can see, kOps has set your kubectl context to kubernetes.filipemotta.me.

After few minutes, you should have set a kubernete high available cluster in EC2 instances through kOps.

You can see all the pods running in the cluster and you can check now your setup with calico network is deployed.

Now we are going to deploy one more node to our cluster. It’s simple. Edit the node instance group file where you’ll want to deploy. In this case, I am going to deploy in us-west-2a. So, let’s edit and setup:

Don’t forget to apply these changes…

Some changes requires rolling updates. If required you should use:

Now you can see that the new node was deployed in the specific availability zone and now be part of the cluster.

Usually a common bottleneck of the control plane is the API server. As the number of pods and nodes grow, you will want to add more resources to handle the load. So let’s deploy a new api server:

In this case, I changed the role option to APIServer, min and max size and the machineType to micro.

In this case, how changes enolves controlplanes nodes, its requires rolling-update option. Each master node will be shutdown applying the upgrade one at a time, but our cluster does not stay unavailable because we’ve setup high available cluster.

Finally, at the end of this section, let’s delete one instance group node.

The final result is:

So, i’ve to setup the CNAME DNS grafana.kubernetes.filipemotta.me to this URL. 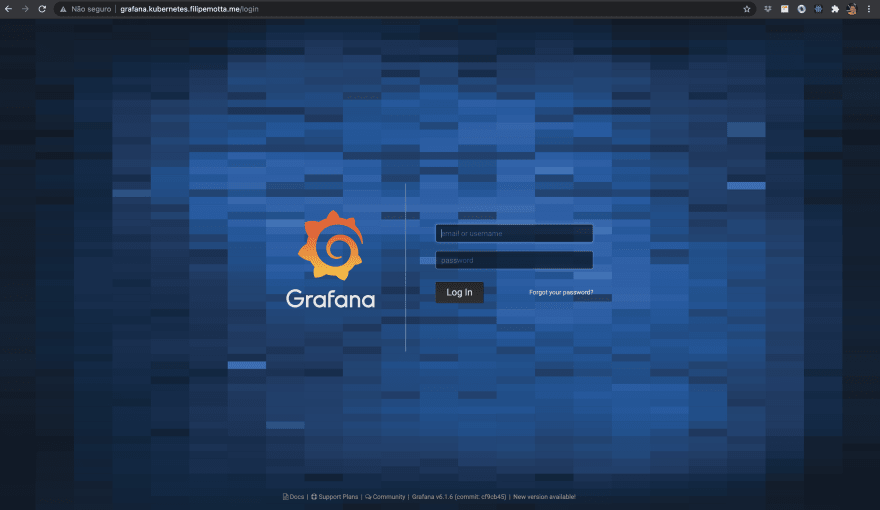 And that’s it. We have successfully deployed a highly available and resilient Kubernetes cluster using Kops. This post has shown how to manage a Kubernetes cluster on AWS using kops. I guess Kops is an awesome tool to running a kubernetes production-grade cluster in AWS or others cloud providers. Try it !!

We use cookies on our website to give you the most relevant experience by remembering your preferences and repeat visits. By clicking “Accept All”, you consent to the use of ALL the cookies. However, you may visit "Cookie Settings" to provide a controlled consent.
Cookie SettingsAccept All
Manage consent

This website uses cookies to improve your experience while you navigate through the website. Out of these, the cookies that are categorized as necessary are stored on your browser as they are essential for the working of basic functionalities of the website. We also use third-party cookies that help us analyze and understand how you use this website. These cookies will be stored in your browser only with your consent. You also have the option to opt-out of these cookies. But opting out of some of these cookies may affect your browsing experience.
Necessary Always Enabled
Necessary cookies are absolutely essential for the website to function properly. These cookies ensure basic functionalities and security features of the website, anonymously.
Functional
Functional cookies help to perform certain functionalities like sharing the content of the website on social media platforms, collect feedbacks, and other third-party features.
Performance
Performance cookies are used to understand and analyze the key performance indexes of the website which helps in delivering a better user experience for the visitors.
Analytics
Analytical cookies are used to understand how visitors interact with the website. These cookies help provide information on metrics the number of visitors, bounce rate, traffic source, etc.
Advertisement
Advertisement cookies are used to provide visitors with relevant ads and marketing campaigns. These cookies track visitors across websites and collect information to provide customized ads.
Others
Other uncategorized cookies are those that are being analyzed and have not been classified into a category as yet.
SAVE & ACCEPT