Do you know about Blockchain? How to build solutions using Blockchain ? Anything about AWS Blockchain ? – Well no worries , the following discussion would dive into the basic details of Blockchain ,Blockchain benefits, the way Blockchain works, and finally the Blockchain services on AWS.

The intersection between cloud computing and blockchain is leading to various changes in the approaches for conducting business.

Hence, the introduction of blockchain on AWS is extremely promising. Indeed , it is inevitable to notice a growing interest in an AWS Blockchain in recent times.

But first, back to basics!! Before going deep dive in Blockchain on AWS let’s do a run through on Blockchain technology.

If you are thinking of cryptocurrency when you hear the term ‘Blockchain’ , then you are yet to discover the breadth of Blockchain Technology. It is a computer file for storing data. Or, to put it in more technical terms, it’s an open, distributed database. Instead of having a central database/entity verify the data, a network of individual computers verify and sync the stored data .

It is a new technology which governs that no one person or entity (say, a government or corporation) has control over the blockchain; this is a radical departure from the centralized databases that are controlled and administered by businesses and other entities.

If this sounds familiar, it’s because Bitcoin operates in the same way.

In fact, Bitcoin is the first example of blockchain in action.

Oh wait , but what is so great about Blockchain?

Let’s look at some of the biggest advantages of using blockchain technology:

It’s decentralized, Because it doesn’t rely on a central computer, it’s resistant to a lot of damage. If one computer fails, the system stays up. More importantly, the data is very hard to corrupt. To compromise data in a centralized system, someone just needs to change what’s in the central database. However, because there’s no central database on a blockchain network, a single computer would have to override the entire network, which is much harder to do.

You get a history of activity, not just a snapshot in time. When you look at a regular database, you’re getting a snapshot of data that’s up to date in that moment in time. Blockchains do this too, but they also maintain a record of all the information that existed before. It’s a database with history, if you like.

There’s no one, central point of attack, The fact that blockchain is a decentralized way of storing and accessing data makes the whole system incredibly secure – because, unlike a centralized database, there’s no one single point of entry for hackers. This makes it particularly useful for recording transactions in a secure manner.

And no centralized control, Because the system of record is decentralized and replicated in its entirety in multiple places, there’s no need for a central administrator and all the costs and infrastructure that comes with it.

How does Blockchain work?

In very simple terms, the file is comprised of blocks of data, with each block being connected to the previous block, forming a chain. Each block also contains a record of when that block was created or edited, which makes it very useful for maintaining a detailed system of record that cannot be corrupted or lost. Because the whole blockchain is duplicated across many computers, any user can view the entire blockchain. Transactions or records are processed not by one central administrator, but by a network of users who work to verify the data and achieve a consensus. 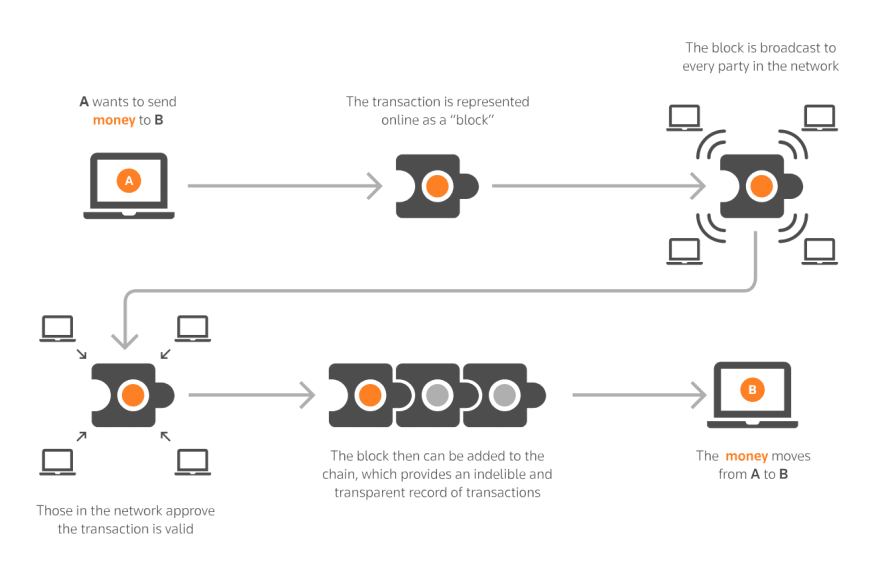 For building a blockchain based solution businesses need to deploy their choice of blockchain frameworks on servers, create networks and manage them all the way to scale the solution. Managing networks and multiple entities can soon become a huge task and a cumbersome process, that is where the blockchain on cloud based solutions from AWS fits in.

What does Blockchain on AWS include?

The AWS Blockchain ecosystem is tailored for addressing diverse business issues in the deployment of blockchain projects through cloud platforms. Let us take a closer reflection on each individual service in Blockchain on AWS to have further understanding regarding the applications of AWS Blockchain

AWS offers open-source templates for apps built on blockchain. They deploy the network on an ECS cluster or an EC2 instance running Dockers. In other words, the template links the app and the network.

Then, developers can create their own blockchain network in their personalized Amazon VPC. Developers could configure the network Access Control Lists and VPC subnets easily for defining the characteristics and functionalities of their decentralized network. Furthermore, developers can also assign granular permissions for their blockchain network in AWS Blockchain Template through AWS IAM. The granular permissions will help in establishing restrictions on the resources that are accessible by Amazon EC2 instance or an Amazon ECS cluster.

Finally, developers could deploy decentralized applications by writing smart contracts and running them on their newly created blockchain network.

For most blockchain applications, Ethereum is perfect. However, there are a couple more options that may be useful in certain settings. You lose some decentralization but gain other capabilities.

Amazon’s Quantum Ledger Database (QLDB) is a managed ledger database that chains together changes in an append-only journal.

It is a fully managed ledger database that provides a transparent, immutable, and cryptographically verifiable transaction log owned by a central trusted authority. Amazon QLDB tracks each and every application data change and maintains a complete and verifiable history of changes over time.

In comparison to ethereum, it’s managed by AWS, meaning it isn’t fully decentralized. This doesn’t mean all the benefits are lost. Data in the ledger remains unchangeable and secure, and the database is completely managed to save time and money. For ledger applications, it’s a great fit.

Amazon Managed Blockchain is a fully-managed tool for maintaining a public or private blockchain network on Hyperledger Fabric or Ethereum. Developers can manage networks with single API calls.

Again, it is managed by AWS, so some level of decentralization is lost in the process. However, architectural decentralization remains: data is still verified across many different devices in a non-changeable way. Thus, many of the security and reliability benefits remain completely intact.
Because of these security benefits and more, blockchain is an amazing technology with lots of potential in app development.
But no matter the method, blockchain on AWS has many uses.

On a concluding note, you can clearly note that the combination of the cloud and blockchain can induce positive outcomes. The best things about both technologies come together to offer the most feasible business solutions with assurance of productivity. The flexibility, security, and scalability benefits of blockchain on AWS are the foremost reasons to consider its potential. In the long run, the development and deployment of blockchain solutions through cloud platforms would gain mainstream recognition.

We use cookies on our website to give you the most relevant experience by remembering your preferences and repeat visits. By clicking “Accept All”, you consent to the use of ALL the cookies. However, you may visit "Cookie Settings" to provide a controlled consent.
Cookie SettingsAccept All
Manage consent

This website uses cookies to improve your experience while you navigate through the website. Out of these, the cookies that are categorized as necessary are stored on your browser as they are essential for the working of basic functionalities of the website. We also use third-party cookies that help us analyze and understand how you use this website. These cookies will be stored in your browser only with your consent. You also have the option to opt-out of these cookies. But opting out of some of these cookies may affect your browsing experience.
Necessary Always Enabled

Performance cookies are used to understand and analyze the key performance indexes of the website which helps in delivering a better user experience for the visitors.

Analytical cookies are used to understand how visitors interact with the website. These cookies help provide information on metrics the number of visitors, bounce rate, traffic source, etc.

Advertisement cookies are used to provide visitors with relevant ads and marketing campaigns. These cookies track visitors across websites and collect information to provide customized ads.

Other uncategorized cookies are those that are being analyzed and have not been classified into a category as yet.